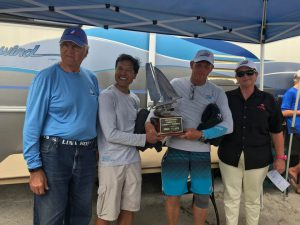 Four of the top five spots at the event recently completed in Clearwater, Florida were captured by
teams tipping the half century mark at both helm and typically crew. After three consecutive 4-race
days in double trapeze conditions, the team of Robbie Daniel (Florida) and Gary Chu (Wisconsin) came
out on top with six bullets and no other finish lower than a three. Second Place was captured by
husband and wife team, Matt and Gina McDonald (Florida), with impressive throws of just a three and a
four. Defending Champions, and the only Top Five team without gray hair on board, were youth team,
Mark Brunsvold and Dylan Heinz (Florida) finishing in Third. The single-handed Champion was Ken
Marshack (Washington).
Embracing the importance of attracting more youth to catamaran sailing, the Formula 16 Fleet invited
the Nacra 15s to participate in the event. The two fleets shared a single start, amounting to 23 boats on
the line. The youth teams sailed exceptionally well, gathering valuable bigger fleet experience.
Matthew Monts (South Carolina) and Carlyn Blauvelt (Georgia) claimed First Place in the N15 Fleet.
Great sportsmanship was displayed by all sailors throughout the event, as evidenced by the fact that the
Protest Committee was not called upon a single time throughout the week. The Race Committee also
conducted a flawless event, much appreciated by all participants. Special thanks go out to lead sponsor,
Red Gear Racing, and to Jill Nickerson for her never-ending support.
At the Class Meeting, which preceded a spectacular dinner, the new leadership team was nominated
and elected. Meeting Minutes will be published at USF16.org soon detailing all agreements.
Plans are also in the works for a 2018 Championship. The leadership team expects to make an official
announcement before year-end.